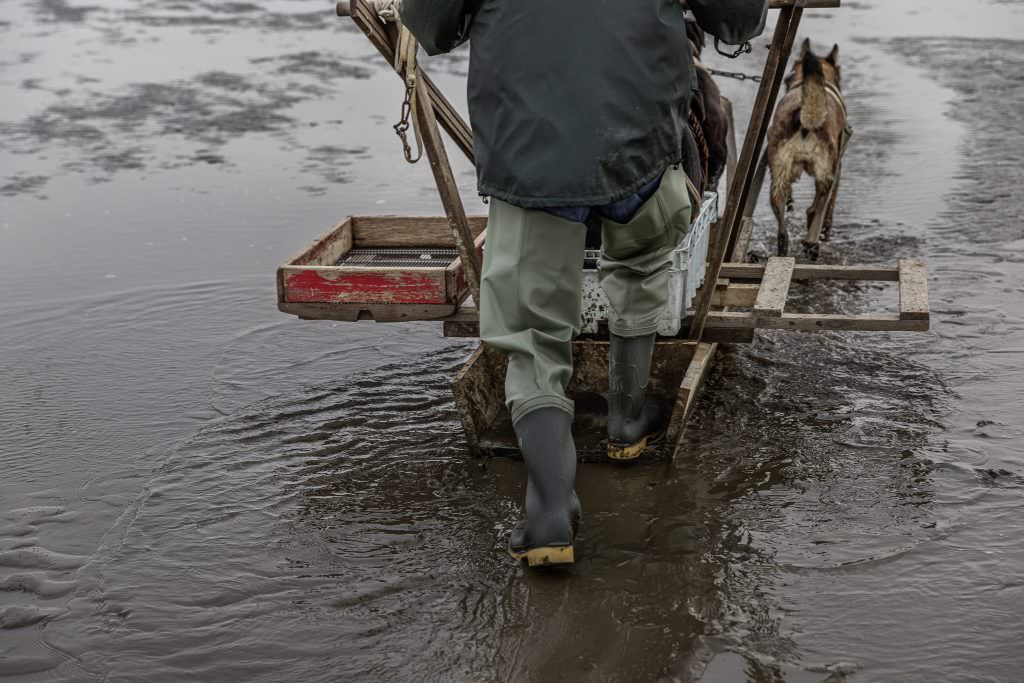 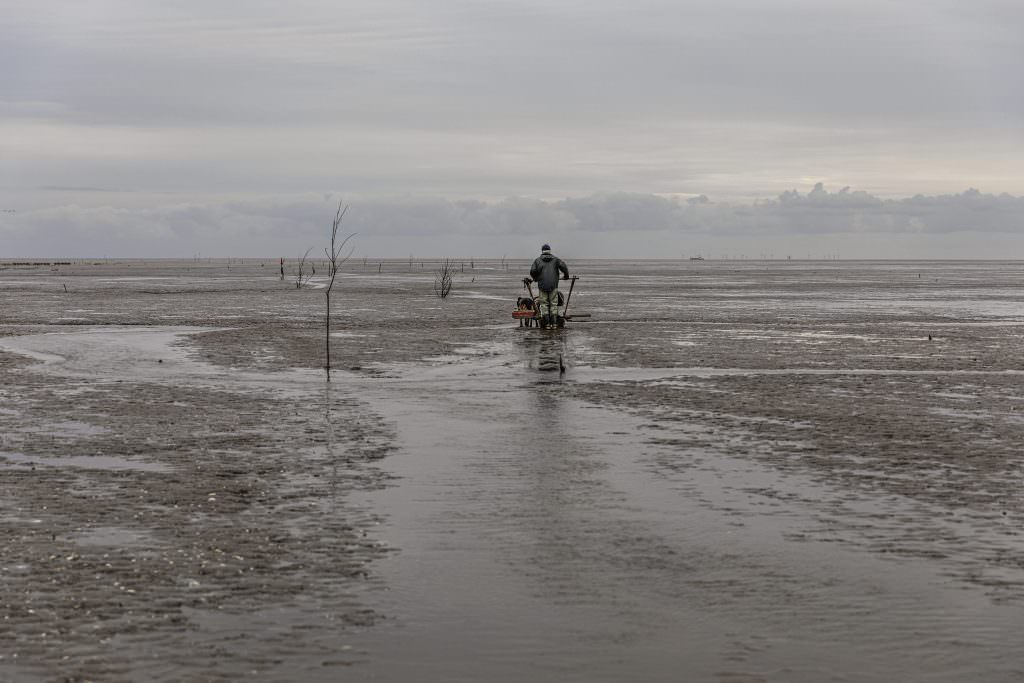 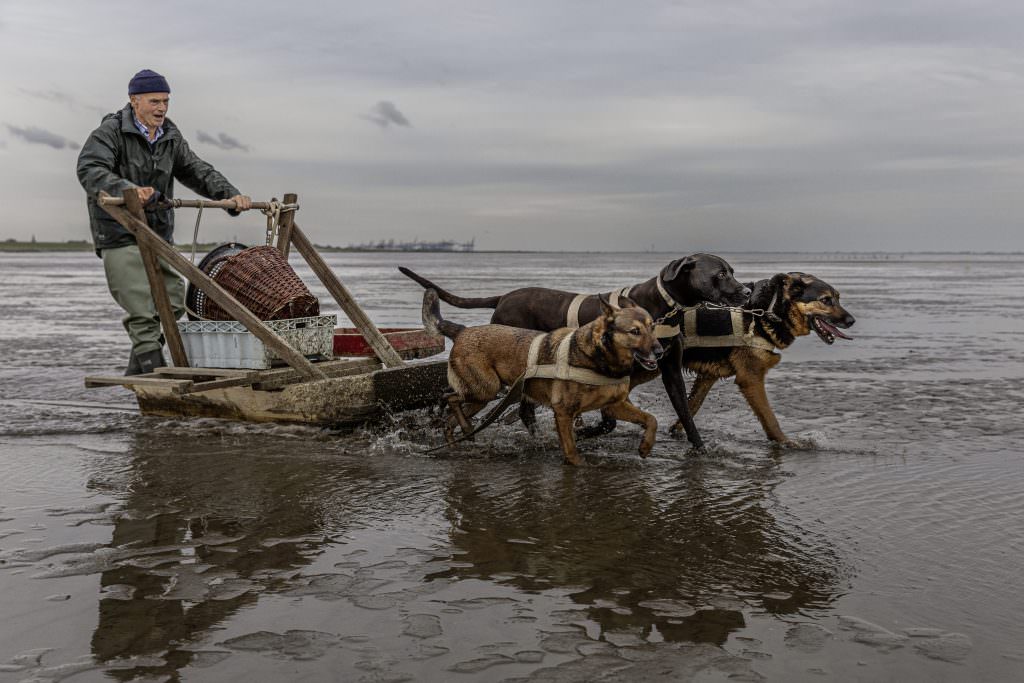 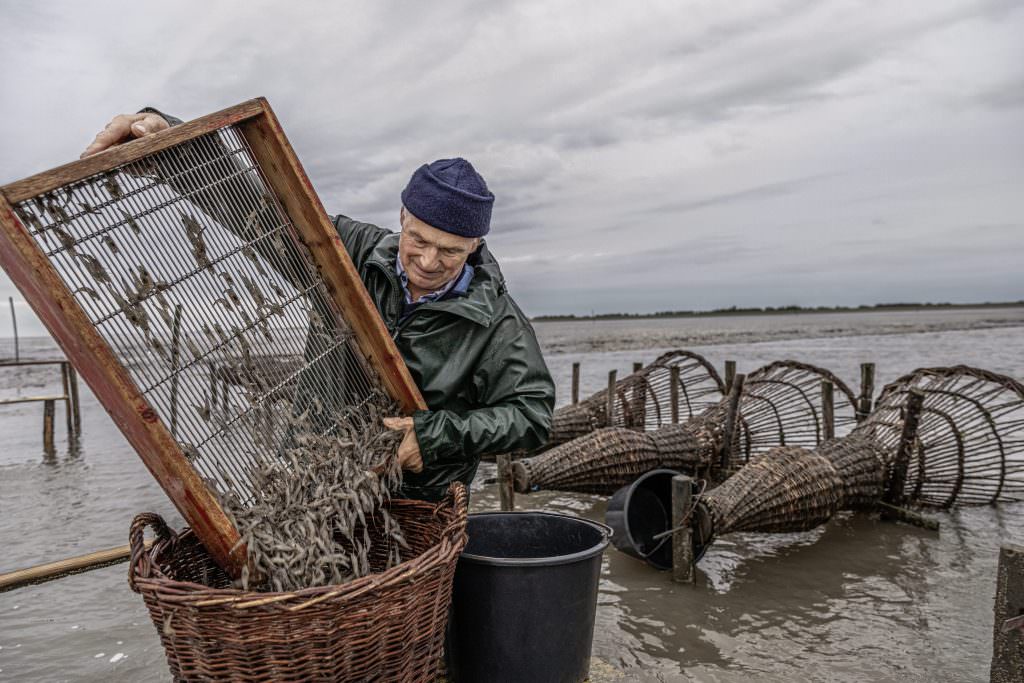 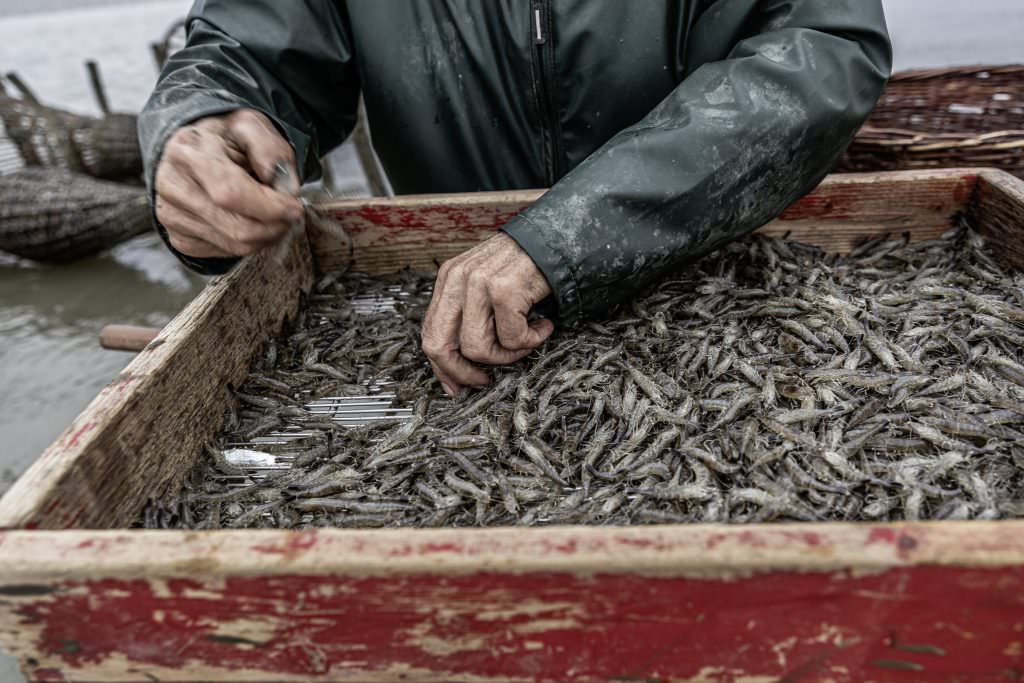 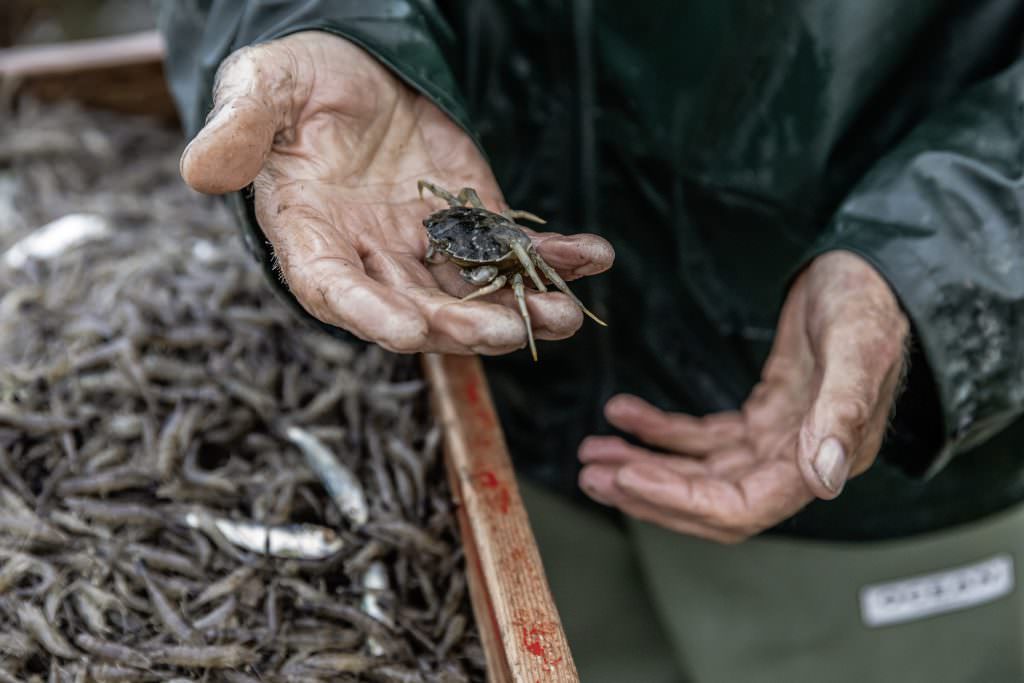 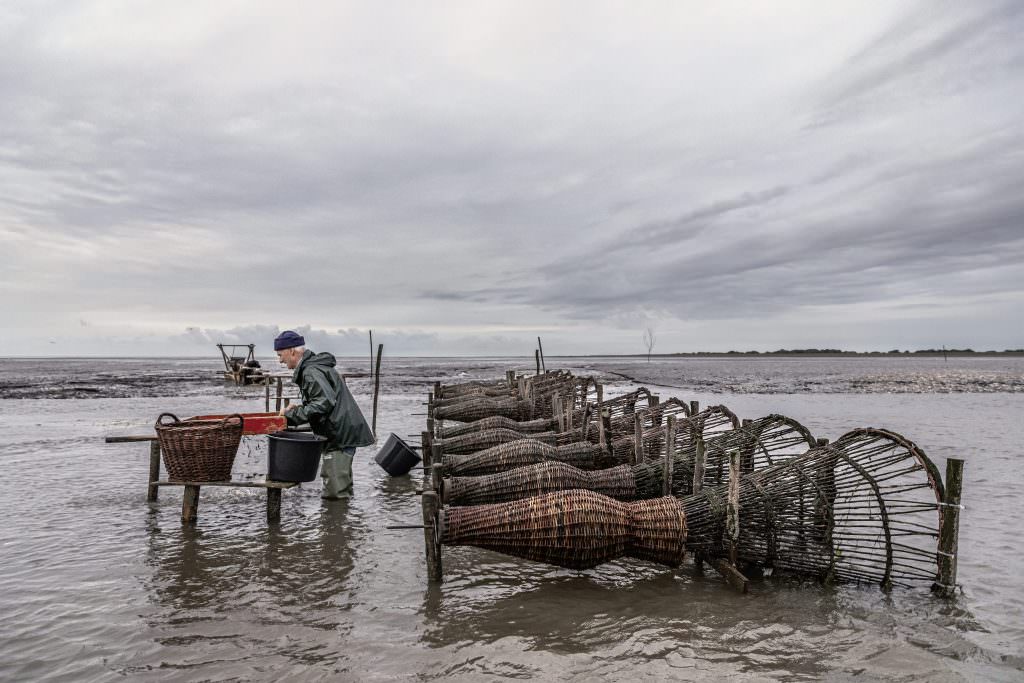 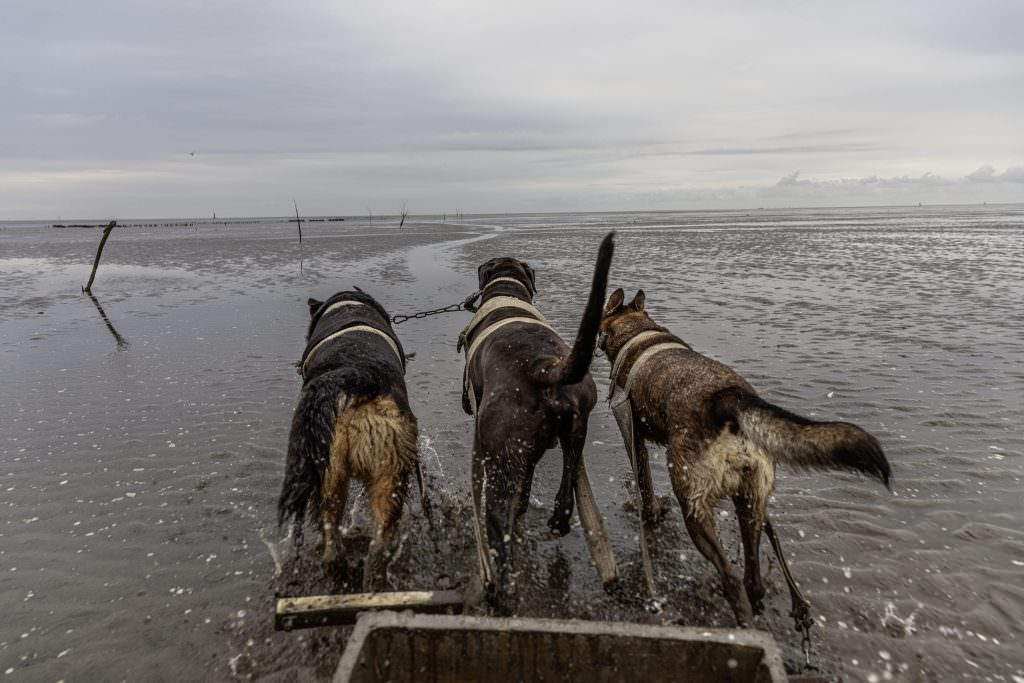 The profession is called weir fisher. It’s been around for 100 years. Nobody does it anymore except me. You won’t find a single weir fisherman here on the North Sea coast. I was the first one in my family. My uncle had a crab boat, but he didn’t have any pots.

My parents had a butcher shop here in Wremen. They wanted me to learn a trade, but I didn’t feel like butchering. I started a carpentry apprenticeship in 1961. I was only 13 years old. I was born on 11 May 1947 and the apprenticeship started on 1 April. One year later I quit the apprenticeship and was then on my grandfather’s farm in the agriculture.

At that time I already had a few fish traps of my own. I also had a buttlade, which is a device made of two wooden slats and a net. With it you can catch the flounder in the mudflats. Whenever the tide comes in. I sold the flounder. But now there’s no flounder around here. All the seals get it.

So in 1984, I bought a crab cutter for 250,000 marks. It was sold at an auction. My wife and I had sold land before. Then I went out on the cutter and fished crabs for almost twenty years, until 2001. Then I didn’t feel like it any more. When you sail yourself, you have to have a good man on deck. But what I experienced there – terrible. I could write a novel. A Dutchman bought the cutter, it was a good deal. It was still a wooden cutter, in top condition. Five years later they were worth nothing. Now the cutters are all steel.

I put out my first traps in 2001. I started with ten traps. Later they became more and more. I once had 45 fish traps, back then I did it together with a neighbour. Now it is ten again. Sometimes there are 50 to 70 pounds of crabs in one cage. Per pot! The big pots can be used for two years, the small ones only for about a year. Then the ones outside are filled with mussels.

I weave the fish traps from willow branches myself. It’s not so easy to weave. Once it’s the big basket, then the small basket. Someone showed me that when I was still at school. I quickly managed to do it well then. I also build the mud sledge myself. The floor consists of an oak plank, which I bent myself over the fire. Before that it lay in the rain barrel for eight days. The sledge here was a bit too heavy at first. Then I planed something off on all sides, and now the dogs run like the fire brigade again.

The dogs are not particularly trained. We just handle them well, I also keep them in check quite well. Not everybody can do that. If one runs, the others join in. They know they have to wait in the mudflats until the pots are empty. They must be mongrels, they’re more resistant: Labrador, Bernese mountain dog, German shepherd. You can forget breeding dogs before the sledge. Four dogs were the most I had before the sled. Now there are three. They’ll pull me and the catch.

The tide decides when I go out. I usually go out three hours before low tide, so half tide. If the crabs are still in the water, they won’t die right away. Then there’s enough water in the tide so I can flush the catch clean. It takes me a good hour to empty the pots. Then I pack the crabs onto the sledge and bring them back. They are put into a big cauldron with boiling saltwater, which my wife has heated up beforehand. When the crabs float up and are pink, they come out. Rinse them once and put them out to dry. And then in the fridge.

The best months for crabs are September and October. You can almost set your watch by that time. They are thickest in October. I don’t know if I’ll go out again next year. Maybe not that far. Maybe I’ll stay here and set the pots in autumn at the most.

A topic that is very close to my heart is #sustain

It´s friday, have fun!⁠ Motif from the corporat

Part of the BFF

The BFF professional association of freelance photographers and film designers is Germany's trademark for professional photography at the highest level.